GDPR – Updated Consent To Be Contacted By

This is the first update to include changes required by GDPR, please read.

The ‘Data protection’ section of the client front screen has been updated as below.  You can now track what date consent has been given and set-up your own lists of who your customers consent to be contacted by, and what they consent to be contacted about.  By default the options are contact by ‘Our company’ and ‘Associated companies’ in relation to ‘All business’ to match the current Durell system.  Existing consent ticks in your system will be pulled through to the Mail / Phone / Email tick boxes for these options. 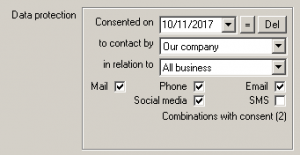 MIFID II requires firms to either record, or make a note of, telephone conversations and electronic communications that relate to “the reception, transmission and execution of orders, or dealing on own account”.  The minimum requirement of what needs to be captured is:

The FCA also suggests good practice would be “sharing the notes made of relevant phone conversations with clients on a regular basis in order to ensure their accuracy.”

The MIFID I requirement on recordkeeping is that ‘records must not be capable of being manipulated or altered.’

So to allow you comply with these requirements we have added an additional feature to the Notes in Durell.  When setting up ‘Actions for Notes’ under ‘Setup -> Client notes -> Setup actions’ there is a new check box at the bottom of the pop-up to ‘Lock note’.  This means that once a Note with that Action has been saved it will no longer be editable.  So for example, you could create an Action for ‘Client call (locked)’ with that tick box checked and use it to record such notes.

The same feature has been added to Policy and Claim Notes as well as Client Notes, and obviously can be used for other purposes as well.

An user access-right has also been added under Setup -> Users -> Clients – ‘Client & policy notes locked entries’, which is defaulted to ‘View only’ so an administrator can be given permission to edit locked notes if required.

N.B. Durell already includes an integration (free of charge) with Synety Cloudcall for automatically recording phone conversations and linking them to your client records, which works with both normal hand sets and mobiles. Synety Cloudcall charge separately for this, but feel free to call our sales team for further details.

Get back to our Latest Program Updates.

Like the majority of websites we use cookies to store information on your computer. These are used for site functionality and to evaluate and improve your browsing experience. More info.